ORLANDO, Fla. – A man has been arrested in the shooting of a maintenance worker in Orlando on Friday,  according to the Orange County Sheriff’s Office. 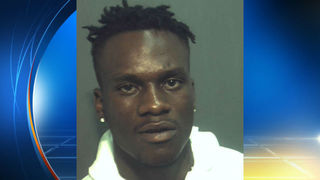 Ward was arguing with his girlfriend inside his apartment and when the woman went to leave, Ward followed her and fired several rounds at the Magnolia Court Apartments.

A maintenance worker was putting up a fence at a school next to the apartments, when the fight broke out.

Another worker, who didn’t want to give us his name says he saw the worker on the ground when he got to the complex.

“I pulled up and guys were laying down trying to give guy CPR and they say he got shot,” said the maintenance worker. “I started asking questions and they said who it was and the girl he was shooting at was the one that told police that her boyfriend shot her.”

“I feel real bad for him because he was just out there working because of some ignorant fool with a gun,” the maintenance worker added.

Brandy Moore is a mom who lives in Magnolia Courts who says she is moving out.

“It’s like you can’t even come outside without having to worry about your life,” Moore said. “It’s heartbreaking. I can’t even imagine because what if that happened to my kid. Because I have a 5-year old and a 4-year-old and it could have been either one of them out there playing in the yard.”

Another neighbor, who would only go by the name of Alex, says he’s sick of the violence too.

“Believe it or not that’s what scares me because a lot of kids are here,” he said.

Orange County sheriff’s officials said the victim was taken to Florida Hospital Orlando and is in grave condition.

Ward has a criminal history including past felony charges for robbery with a firearm, carrying a concealed firearm, possession of marijuana with the intent to sell and deliver and possession of drug paraphernalia.

Watch News 6 for more on this story.